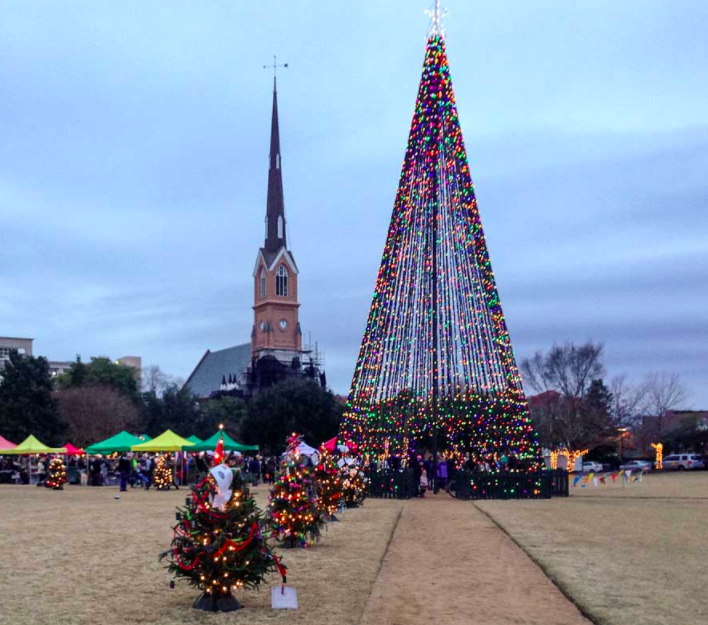 This weekend marks that special time when Marion Square transforms into a winter wonderland and that means we say goodbye to the regular season of the Charleston Farmer's Market... and hello Holiday Magic in Historic Charleston. Over the last 25 years, the farmer’s market offerings have progressed from more than just summer melons to a true year-round assortment of the best that local growers, tenders, cultivars, and artisans have to offer--much like markets of yesteryear. As the function of the local marketplace seems to have come full-circle, we thought it’d be interesting to look at how peninsular residents got their fresh-caught, just-picked, hand-made goods in the past. 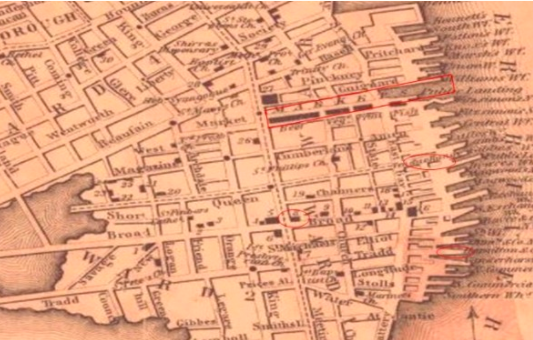 Vendors used wooden stalls at the original Beef Market until a brick building was constructed in 1739; this was replaced by another brick structure in 1760. The great fire of 1796 destroyed the Beef Market, and it was not rebuilt. The land was instead sold to First Bank of the United States, for whom Gabriel Manigault designed the building that we currently know as our own City Hall.

The grand Fish Market that had been erected in 1797 was partly destroyed in the hurricane of 1804 and was closed a few years later; the area became a wharf used by fisherman into the latter half of the 20th century and none of the original Fish Market remains. The Tradd Street market included a wharf where farmers could land produce and animals; six stalls in the market were reserved for “planters that bring or send their own flock to market, suggesting that live animals were sold here as well. This market, too, was subjected to fire and foul weather and also eventually closed. Remember a few years ago when there was an archeological dig on East Bay and South Adger’s Wharf? That was the Mayor’s Walled City Task Force, who uncovered lots of interesting finds from the former “Lower Market” site. 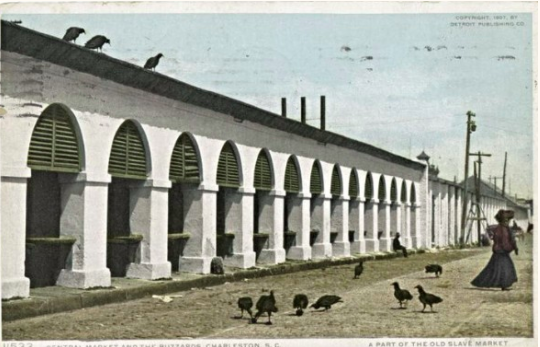 Vendors moved to the recovered marshland that was donated by Charles Cotesworth Pinckney in 1788 for "public market or markets for the purpose of vending all sorts of butcher meats, poultry, game, fish, vegetables and provisions." This became known as the Centre Market, and today we know it as the City Market (or just ‘The Market’). The first market sheds were built in 1790 and within 15 years, the strip of land between Meeting Street and the harbor became completely occupied by vendors and was divided into sections for the sale of meat, fish, and produce. (And in case you were somehow misinformed, slaves were never sold at the Market.)

“Charleston Eagles” were well known to locals and visitors alike; the vultures in the Market were protected by law and provided an invaluable service to the city: “In all the wealth of Wall Street, nor even on Fifth Avenue, New York City, there is found no man or woman more independent or dignified as a Market Street, Charleston SC buzzard. There, as nowhere else, is found that commonly despised fowl of the air--so tame and leisurely stalking in pursuit of his daily food which is found without difficulty. Not that Charleston is a filthy city, but that the old City by the Sea is, as she has ever been, famous for a “square meal” and the buzzard is free to help himself and is protected by the laws of South Carolina’s famous old seaport. You kick or cuff a Charleston buzzard and you at once find yourself in the hands of the police and before the Mayor and fined to the limit.” (News & Courier, 06/20/1911) 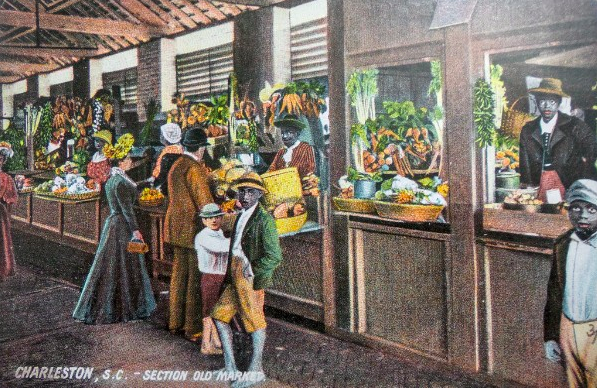 The Market was the center of commerce for Charleston’s victuals throughout the 19th century and most of the 20th century, but downtown residents always had another reliable resource for fish, shrimp, vegetables, flowers, and just about anything else. While huckstering and peddling was common in 18th and 19th century cities, Charleston’s street vendors were different: slaves or freedmen, they were all of African descent. The melodious Gullah peddler cries heard in the streets of Charleston were noted by visitors and often praised and studied by locals. One of Charleston’s most famous early street vendors was “Old Daddy California Tom,” who peddled watermelons downtown before the Civil War from an old “delapidate” cart. A city institution, he was called California Tom because “popular superstition had it that his melons came from California [!] and his song was a melodious refrain worded thus: Fresh and fine, Just from the vine, California watermelons, Come in time, winding up with Barcalingo, water melon--Barcalingo, water melon.” (News & Courier, 08/14/1873) Looks like California held some sort of glam, even back then. 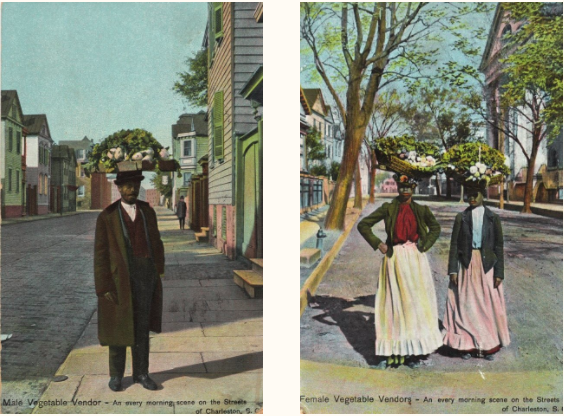 Male and Female Vegetable Vendors- An every morning scene on the Streets of Charleston, SC, ca early 1900s

Another famous street vendor is described by Harriette Kershaw Leiding in her 1910 book, Street Cries of an Old Southern City, thusly:

“Old Joe Cole, good old soul,” who does a thriving business in lower King Street under the quaint sign of “Joe Cole & Wife” is the bright, particular, tho fast-waning start of our galaxy of street artists. He sets the fashion, so to speak, in “hucksterdom.” Joe has many imitators but no equals, for he looks like an Indian Chief, walks with a limp that would “do a general proud,” and uses his walking stick as a baton, while bellowing like the “Bull of Bashan.” It is a never-to-be-forgotten occasion when Joe lustily yells:

Porgy in the Summer-time

An e Whiting in the Spring

Don’t be mad--Heres your shad

Joe was remembered for his cry, “Porgy walk, Porgy talk, Porgy eat with a knife and fork.” In an article from as late as 1957 lamenting “The Vanishing Huckster,” Joe is remembered: “Gone is Joe Cole, a tremendous reddish skinned [African American] with a magnificent voice worthy, some said, of grand opera. Joe sold crabs accompanied by his dog Jeff Davis, and his beautiful voice was known all over town, as was his evil reputation.” Uh-oh. What’s up, Joe? 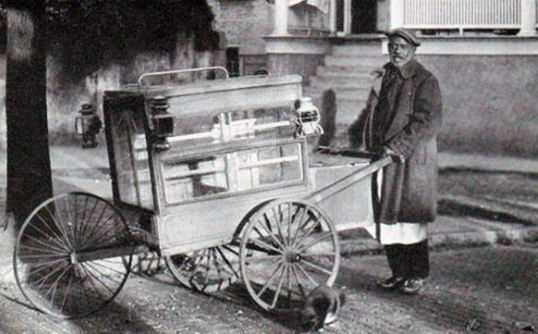 The Fate of the Hucksters

The article quoted above from 1873, after describing the street cries of many vendors, ends with the sentence, “They are as perpetual as the eternal hills, and will last as long as Charleston has a name and existence.” Well, that’s not quite true, now is it? Newspaper articles over the years during the 1900s variously praise the Charleston street criers or complain about them: “In selling shrimps it appears that no regard is paid to the law respecting the hours when hawking about the streets is permitted and the rest and quiet of three-fourths of the residents of the city are ruthlessly disturbed every day. The...vendors begin their crying before 6 o’clock in the morning and when a number of them get together they attempt to howl one another down, awakening the taxpayers at the time when sleep is sweetest.” (Evening Post, 09/28/1899) Okay, six o’clock in the morning? Valid point.

The September 1, 1957 Sunday Magazine story in the News & Courier headlines, “‘Raw, Raw Shrimpee’! Street Vendors Still Hawk Their Wares In Charleston, But The Plaintive, Ghostly Melody Soon Will Be Just A Reminder Of---The Vanishing Huckster.” The author names higher wages in industry and modern methods of production and merchandising as contributing factors to the disappearance of vendors. “While the flower and vegetable women still vend their wares, and the best local shrimp may still be bought from the street vendor, the color and the music is fast disappearing, and when it does, something of the atmosphere and spirit of old Charleston will go with it.”

For those of us too young to have heard the melodious street cries of Charleston, there are a couple of opportunities to heighten your imagination to what they were like. You can listen to the The Spiritual Society's "Field Recordings, 1936-39" CD that includes recordings of the champion street criers from the 1936 Azalea Festival. As far as experiencing anything close to the old City Market, where residents gathered to socialize and not buying local wasn’t an option? Well, the Charleston Farmer’s Market on Marion Square is the closest thing we’ve got. And, like we said, December 2nd is the first day of the holiday market season. So, we’ll see y’all there?


Should you require assistance in navigating our website or searching for real estate, please contact our offices at 843-270-2797.