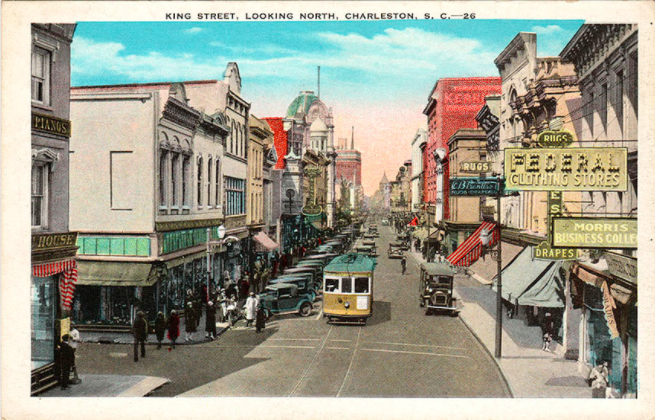 Y’all know that you can’t throw a stone in any direction here without hitting a building with an interesting story, which is what makes Charleston, well, Charleston. Some of the particularly fascinating ones seem to come from buildings that have been repurposed--like the old Murray Vocational School where Lois sold a condominium, or the former warehouse circa 1835 whereGinger manages a rental in the Queen's Gate condominiums. And now Ruthie has just listed a condominium in another repurposed building--the site of the old mortuary and funeral home of J.M. Connelley & Company at 309 Meeting Street, just south of Calhoun. The business closed three decades ago, but it was an important part of our community for nearly a century before that. Curious? 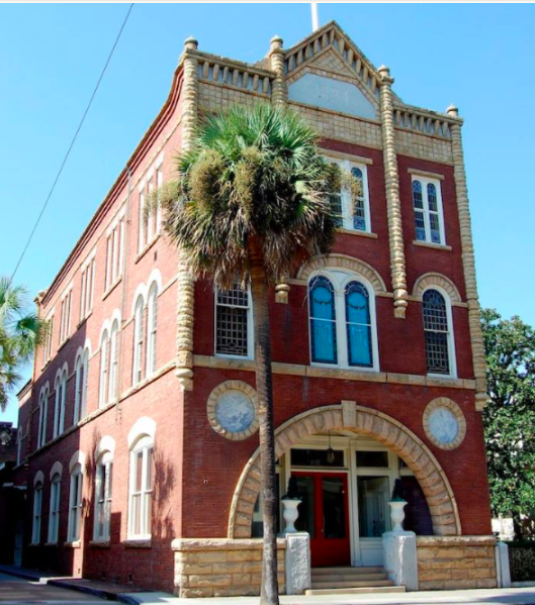 In 1886, Edgefield native Jesse M. Connelley had pulled enough money together from railroad work and selling sewing machines and organs that he was able to buy the undertaking business of Frederick Ansel, located at 143 Calhoun Street (where the Knights of Columbus Hall stands now) and found the J.M. Connelley Company. A few years later, he bought a circa 1796 residence around the corner at 313 Meeting Street. The residence was one of a pair built as luxury rental town homes--not unusual at the turn of the 19th century as Charleston was coming into an economic boom. John Horlbeck built the Charleston single houses using brick made at his brickyard at Boone Hall and the finest woods and woodworking techniques were utilized. Built in the Federal style, the exterior of 313 was later ‘Victorian-ized’ by Connelley but the interior was left largely intact. The sister house, on the corner of Meeting and Calhoun where the bank sits now, was demolished in 1939. 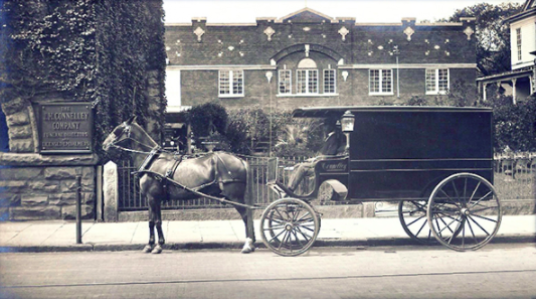 The J.M. Connelley Company, 309 Meeting Street, on the left. The large brick building is a former casket factory which now houses the College of Charleston Physical Plant. From SC Funeral Director’s Association website.

In 1893, Connelley bought the land at the northwest corner of Meeting Street and Burns Lane and combined the property with his residence and garden. He hired architect John D. Murphy to build the three-story stone-trimmed brick building in the Richardsonian Romanesque style--one of the finest of the few examples in the city. Connelley was a resoundingly successful businessman: in addition to the funeral business, he also sold flowers and exotic fish. Here’s how The Sunnyside, a New York publication of funeral directors, described him on October 1, 1899:

J. M. Connelley, president, is a fifty-year old hustler, and was the first to introduce embalming in South Carolina, as well as his own city, Charleston. He has been undertaking 13 years, during which time he has embalmed and shipped bodies to all points in the United States, Canada, Cuba and many other quarters of the globe, from which he holds testimonials. He has been as well a leader in introducing modern methods for conducting business, having built a modern building exclusively for undertaking, which is pronounced one of the best known to the profession anywhere. The offices, reception, trimming and show rooms, morgue and warehouse have been declared simply perfect. The appearance of the place is picturesque. The lot has a frontage of 200 feet and a depth of 230. On one side is his establishment, and on the other his residence. In the intervening space is a floral garden with fountain and gold fish, while six large greenhouses and his casket factory are in the rear.

Connelley was involved in more than a few “firsts”--not only was he the first to introduce embalming to the state, his Charleston Greenhouses produced the first cut-flower business in South Carolina. When the field became subject to regulation, he was the first licensed mortician in South Carolina--and when the business finally shut its door nearly a century later, license #1 was retired forever. 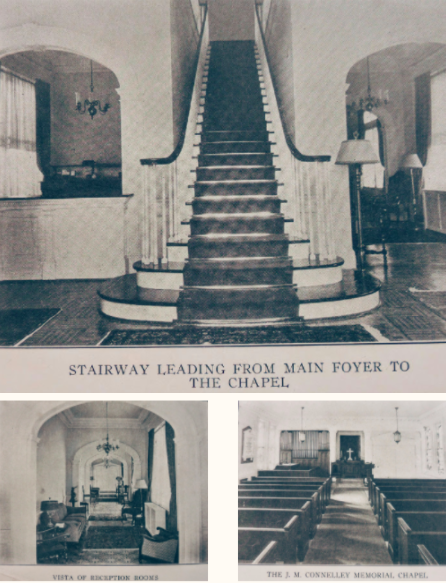 From the 1931 Service of Dedication Program for the J.M. Connelley Memorial Chapel. From the collections of the SC History Room at CCP

Nothing but the Best

When Connelley died in 1913, his son A. Chambliss Connelley took over the family business, continuing his father’s traditions and following the same motto, “Nothing but the Best.” Indeed, Connelley’s was the leading funeral home serving Charleston’s elite for generations. Connelley was considered a pioneer in the field and helped establish industry-wide standards; Connelley’s son carried forward the community-minded and progressive, entrepreneurial spirit of his father. In 1916, Chambliss Connelley was one of the first in the southeast to use motor hearses and motor carriages--a fleet of superb limousines. He erected a large covered garage and established a livery service with the latest models of Lincolns. In 1930, the funeral home was renovated with, according to a January 11, 1931 News & Courier article, “faultless taste” and superb results. Beautiful stained glass was used in the large windows of the new second floor chapel with a 600-pipe organ, pictured above.

This photograph was made to advertise Connelley’s automobile services after World World II. From Charleston: Alone among the Cities.

The business was taken over by Harry W. Hooker and his wife Helen Sottile Hooker in the 1950s. Back then, there was an open-air Greek market and a Waffle House across Meeting Street, where the Holiday Inn sits now. Anyone remember that? The J.M. Connelley Co. closed in 1979, following Mr. Hooker’s death. A group of investors from Atlanta rehabilitated the property for the use of condominiums in 1984. They were among the first to receive federal tax credits for building preservation. There are 12 units in the former funeral building and eight in its rear addition; the former residence is divided into seven units. The large garden between the two structures remains gorgeously intact and still contains a portion of Mr. Connelley’s original outdoor aquarium. Next time you’re walking by, take a peek!

Perhaps you'd like to call 309 Meeting home one day. Lois Lane Properties is pleased to have ratified an offer on Unit # 1 after only 6 days on the market. 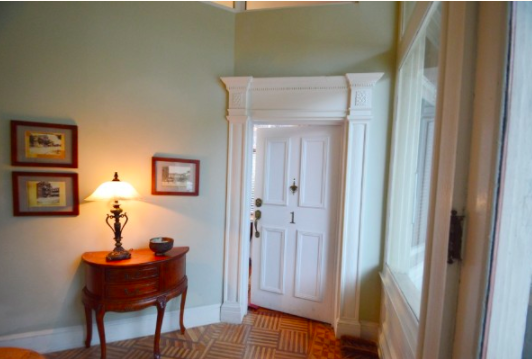 This luxury first floor condo which features incredible architectural details including exquisite parquet floors in varying designs and beautiful mouldings surrounding doorways and ceilings. Fabulous location next to Marion Square and within walking distance of all of the greatest restaurants and venues. 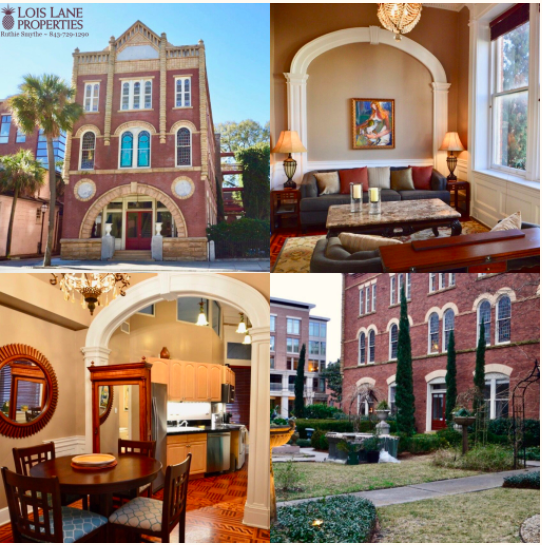 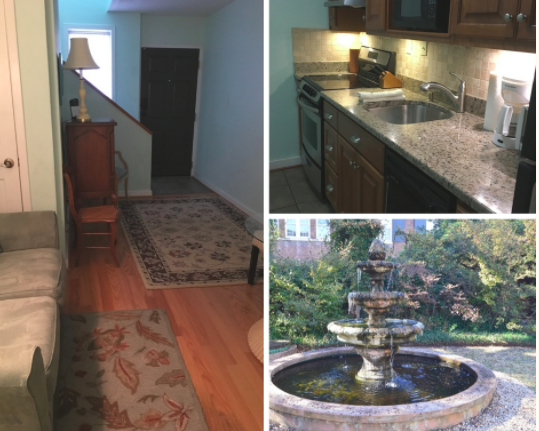 Unit #15 at 309 Meeting will soon be listed for sale! This two story condominium with 1 bedroom, 1.5 baths and 1 off street parking space will be offered for $325,000. It has recently been renovated with nicely appointed kitchen and baths, hardwoods, ceramic tile, new carpet in bedroom, and freshly painted throughout. To find out more in advance please contact Keelin at 843-224-2194 for more details.